Bahrain: 16, Including Minors, Sentenced to 15 Years in Prison in Unfair Trial

The Bahrain Center for Human Rights expresses grave concern over the detention and sentencing of 16 Bahraini citizens to 15 years imprisonment without clear evidence of the charges brought against them. The authorities in Bahrain have been arbitrarily arresting, detaining and sentencing citizens from protest areas in sham trials.
The Ministry of Interior claims that in July 2012 a police patrol was attacked in an attempt to kill policemen. A MOI vehicle was burned and no causalities or injuries were announced by the ministry. The event was followed by an arrest campaign in a nearby village and many were taken into custody.
On 21 March 2013, the higher criminal court sentenced 16, some of them minors, to 15 years' imprisonment and BD10,508 fine after charging them with attempted murder of policemen while on duty, arson of a vehicle owned by the MOI, illegal gathering and possession of Molotov cocktails.
The BCHR documentation and monitoring team met with some of the families of the 16 sentenced to document their cases: 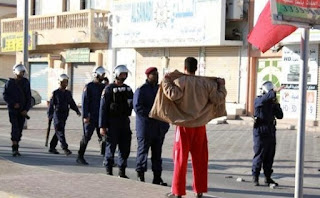 Ahmed Yousif is only 16 years old. He was arrested after his house was raided early morning on 15 July 2012. Ahmed was reportedly beaten and tortured during arrest and interrogation in roundabout 17 - Hamad Town police station.
Hussain Mohammed, 17 years old, was kidnapped by a civilian car on 10 July 2012 when he was with his friend in their neighborhood. His family searched for him but did not hear from him until many hours later. According to his family, Hussain was tortured at the police station and in a prison visit he told them not to talk about the political situation because they record the conversations and whoever discusses such topics is then reportedly subjected to beatings and torture.
Mohammed Jaffer, 17 years old, was arrested after his house was raided by masked civilians. He was reportedly severely beaten in front of his mother, then taken to an unknown destination. The public prosecution ordered his release, however, when he was taken to roundabout 17, Hamad town police station, he was charged in this case and taken back to custody. Mohammed was transferred to Jaw prison a day before his verdict session.
Ali Hussain Al Dubaisy, 21 years old, was in hiding for some time. On 23 July 2012, after leaving his family’s house, he was stopped by 3 civilian cars and kidnapped. His family heard about his disappearance from neighbors. His father called him several times and went to the police station asking about Ali but he was told that he is not in their custody. At midnight, the family received a call from Hamad town police station. Ali was reportedly subjected to torture. He underwent a surgical operation in his legs which wasn’t successful and requires another operation. The prison administration refuses to take him to the hospital for his second scheduled surgery.
Mohammed Ali Abdulhussain, 19 years old, was arrested by civilian cars on 10 July 2012. His family learned of his arrest from social media, went to the nearby police station to ask about their son but they denied having him. After 4 days, they were called by the police station to bring Mohammed’s identity card and clothes. He was taken to the public prosecution on the fifth day of his arrest then transferred to the dry dock prison. His house was raided several times and family members threatened.
Ali Mohammed Sultan, 20 years old, was arrested when his house was raided on 15 July 2012 by masked civilians. He was reportedly beaten and then taken to Hamad town – roundabout 17 police station. He was taken to the public prosecution after 2 days without a lawyer. His family says that they did not hear from him until their first visit when he told them that he was reportedly tortured and beaten, including hearing his brother, who was arrested previously then released, being tortured. He was then transferred to Jaw prison.
Ali Salman Laith, 21 years old, was arrested from a checkpoint in Karzakan. He was taken to criminal investigation where he was reportedly beaten and tortured.
Hasan Salman Laith, 29 years old, was arrested while leaving his in-law’s house. After 3 days his family received a call from the police station. According to his family, he was taken to Hamad Town police station where he was blindfolded for 3 days until he was taken to the public prosecution. He was reportedly subjected to physical and psychological torture and threatened to be electrocuted and sexually assaulted. Hasan told his family that officer Sultan A Qatam told him “we know that you are not involved in this case but you have participated in protests. And you have to confess that you participated in the case and sign on the names of the people involved or it will be the last day of your life”.
There have been many cases of a similar nature with charges of attacking police patrols, explosions and possession of explosive materials that the MOI has been announcing since 14 Feb 2011. Most of these cases have no causalities or even injuries reported, and the majority have no witnesses amongst citizens; however, they are followed by arbitrary arrest campaigns and sentencing to years of imprisonment without providing substantial evidence, such as Al Eker case where 17 were sentenced to 15 years' imprisonment last April, as well as the case of the 3 defendants in the case of possession of 5 tons explosive material who are reportedly subjected to severe ill-treatment and torture. (http://bahrainrights.hopto.org/en/node/5638)
The BCHR believes that the authorities arbitrary arrests, detention and sentencing of citizens in villages where protests take place is part of the suppression of the pro-democracy movement in Bahrain and their policy of collective punishment.
The Bahrain Center for Human Rights calls on the United States, the United Kingdom, the UN and all other close allies and international institutions to put pressure on the Government of Bahrain to immediately release all political prisoners and to drop all fabricated charges against them, provide all defendants with fair and independent trials according to international standards and put an end to targeting of citizens of villages for demanding democracy and human rights.