Free Syrian Army doing what exactly the same thing they accuse the regime of doing; why would the people trust them if they are the same? Torture is immoral and illegal.

CONVENTION AGAINST TORTURE
and Other Cruel, Inhuman or Degrading
Treatment or Punishment


The States Parties to this Convention,

Considering that, in accordance with the principles proclaimed in the Charter of the United Nations, recognition of the equal and inalienable rights of all members of the human family is the foundation of freedom, justice and peace in the world,

Recognizing that those rights derive from the inherent dignity of the human person,

Considering the obligation of States under the Charter, in particular Article 55, to promote universal respect for, and observance of, human rights and fundamental freedoms,

Having regard to article 5 of the Universal Declaration of Human Rights and article 7 of the International Covenant on Civil and Political Rights, both of which provide that no one may be subjected to torture or to cruel, inhuman or degrading treatment or punishment, 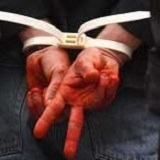 Desiring to make more effective the struggle against torture and other cruel, inhuman or degrading treatment or punishment throughout the world...