Eyewitness accounts from ships raided by Israeli commandos have cast doubt on Israel's version of events that led to the deaths of at least 10 people.

German pro-Palestinian activist Norman Paech said he had only seen wooden sticks being brandished as troops abseiled on to the deck of the ship.

Israel says its soldiers were attacked with "knives, clubs and other weapons" and opened fire in self defence.

The raid led to widespread condemnation and the UN has called for an inquiry. 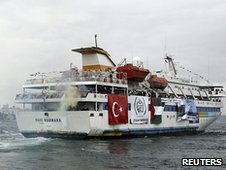 The six ships, carrying aid and campaigners, had sailed from Cyprus in a bid to break Israel's blockade of the Gaza Strip.

"This was not an act of self-defence," said Mr Paech, a politician, as he arrived back in Berlin wrapped in a blue blanket.

"Personally I saw two and a half wooden batons that were used... There was really nothing else. We never saw any knives.

"This was an attack in international waters on a peaceful mission... This was a clear act of piracy," he added.

Mr Paech had been a passenger on the Turkish passenger ship Mavi Marmara where most, if not all, of the deaths occurred.

Fellow German activist Inge Hoeger said they had been on the ships "for peaceful purposes".

"We wanted to transport aid to Gaza," she said. "No-one had a weapon."

She added: "We were aware that this would not be a simple cruise across the sea to deliver the goods to Gaza. But we did not count on this kind of brutality."

Activist Bayram Kalyon, arriving back in Istanbul, had also been a passenger on the Mavi Marmara.

"The captain... told us 'They are firing randomly, they are breaking the windows and entering inside. So you should get out of here as soon as possible'. That was our last conversation with him."

Meanwhile, in Nazareth, Israeli Arab MP Haneen Zuabi - who was on the flotilla - told a press conference that Israeli forces began firing while still in the helicopters hovering over the ships.

"We are calling for an international committee to investigate this tragedy," she said.

Diplomatic sources in Ankara have said at least four of those killed were Turkish. Turkish Prime Minister Recep Tayyip Erdogan said the assault was a "bloody massacre" and must be punished. He said Israel should not test Turkey's patience.

In an interview with the AFP news agency he said Israel's blockade of Gaza was responsible for the deadly raid.

"Had Israelis heeded to my call and to the call of the international community by lifting the blockade of Gaza, this tragic incident would not have happened," he said.

He spoke after an emergency meeting of Nato ambassadors in Brussels called by Turkey.

Here at Beersheva prison in the Negev Desert, in the sweltering heat, a procession of foreign diplomats and lawyers has been trying to gain access to the prisoners.

Most have been let in and so has a party from the International Red Cross. Those who have come out have not said much more than that they have been able to see their prisoners.

Behind the blue and white 8m-high concrete walls, more than 600 people are being held.

For how long and to what purpose is not yet clear. Perspiring journalists can be seen scanning the Israeli newspapers, the headlines reading "Botched raid on Free Gaza Flotilla" and "Flotilla Fiasco".

Renewed violence broke out in Gaza on Tuesday, with five Palestinians reportedly killed by Israeli fire.

Two Palestinian gunmen were shot dead after crossing the border in the south of the territory, a military spokesman said.

Three more people died in an Israeli strike in the north of Gaza, according to Gaza's emergency services. Israel said it carried out an air strike after two rockets were fired from Gaza.

Following the Israeli sea-born raid, Egyptian President Hosni Mubarak ordered the border crossing between Egypt and the Gaza Strip to be opened.

The Rafah crossing has been closed since 2007, although special medical cases are occasionally allowed through.

The Egyptian state news agency said the latest opening was to allow humanitarian aid through. It is not clear how long it will be kept open.

The UN Security Council issued a statement after deliberating through the night.

It said an investigation should be "prompt, impartial, credible and transparent". It also condemned the "acts" which led to the deaths.

The flotilla of six ships, including the Turkish ferry Mavi Marmara, was on its way from Cyprus to Gaza carrying supplies including cement, paper and water purification tablets.

Barbara Plett, the BBC's UN correspondent in New York, said the statement was the result of a compromise between Turkey and the US, Israel's closest ally.

In its defence, Israel released footage showing soldiers landing on the Turkish ship and being apparently attacked.

Captain Aria Shaliker of the Israel Defense Forces, who was part of Monday's operation, says the commandos began the raids armed with paint ball guns.

"I was, myself, on one of the boats, the Israeli boats, approaching the flotilla," he told the BBC's World Today programme.

"It is true that the Israeli commander unit... came on board with paint ball weapons... in order to disperse [people] if there was violence. They were ready for a violent... demonstration on board the flotilla, especially on the big boat, the Marmara.

"No-one really expected that there would be such a violent outcome of what happened.

"First, you know, the soldiers tried to disperse, but in the end when they were shot at, you know when there was shooting... from the other side, there's no other way than turning from paint ball to live ammunition."

Of the 679 activists brought to the Israeli port of Ashdod, only 50 agreed to be voluntarily deported and more than 30 are being treated in hospital for their injuries, reports the BBC's Wyre Davies in Jerusalem.

That means that almost 600 people, from several countries, are still being held in detention centres across Israel and being questioned by the authorities.