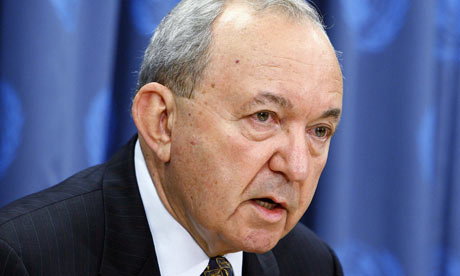 Richard Goldstone is being threatened with protests by Jews if he attends his grandson's coming of age ceremony in South Africa. Photograph: HO/Reuters

Richard Goldstone, the former international war crimes prosecutor, is being forced to meet South African Jewish leaders to hear of their anger over a UN report in which he accused Israel of war crimes in Gaza. The meeting, which Goldstone did not seek, is effectively a condition for his being allowed to attend his grandson's bar mitzvah in Johannesburg.

The renowned South African jurist, who works in Washington, was effectively barred from attending the traditional ceremony at an orthodox synagogue this month after Jewish groups threatened to disrupt it if Goldstone was present.

In the ensuing row, which spread from Johannesburg to America and Israel, Goldstone accused South Africa's chief rabbi, Warren Goldstein, of "brazenly politicising" the bar mitzvah.

Goldstein has been at the forefront of a global campaign to discredit and vilify Goldstone over the UN report, which accused Israel and Hamas of committing war crimes in Gaza during last year's fighting. The chief rabbi has called the former South African supreme court justice a liar, accusing him of "delegitimising Israel".

Three weeks ago, Goldstone announced that his family had asked him not to attend his 13-year-old grandson's bar mitzvah because militantly pro-Israel Jews said they would picket the synagogue during the ceremony. The synagogue elders had also expressed concern about the threat of disruption. Although the source of the threats was unclear, they were linked by Goldstone's supporters in the Jewish community to the South African Zionist Federation and the chief rabbi.

"It's the establishment behind this," said Steven Friedman, a professor of politics at Rhodes university who is a critic of the South African Jewish leadership's unbending support for Israel. "The chief rabbi orchestrated the whole thing. There is a sustained attempt to vilify Goldstone by the Zionist Federation. The only reason he's coming now is it's a public relations disaster. They were getting a roasting in the press in the South Africa."

The South African Jewish Board of Deputies – which has accused Goldstone of "selling out" – brokered an agreement under which his critics will not disrupt his grandson's bar mitzvah in return for the former judge meeting Jewish organisations to hear their fury at his Gaza report.

After the Gaza report was published, Goldstone was subjected to a barrage of abuse. Israeli cabinet ministers denounced Goldstone as an antisemite. Israel's president, Shimon Peres, who reached secret military agreements with South Africa's white rulers, called Goldstone "a small man, devoid of any sense of justice".

Alan Dershowitz, the prominent American constitutional lawyer, recently called Goldstone a "despicable human being". Dershowitz has previously denounced the war crimes investigator as "an evil, evil man", "a traitor to the Jewish people" and the UN's "token court Jew".

Goldstein has contended that the Goldstone report was "unequivocally hostile to Israel while being little more than fallacious propaganda".

But the threats to Goldstone over the bar mitzvah drew support for the former judge from a wide array of South Africans. Another retired supreme court justice and member of the Jewish community, Albie Sachs, said he "felt sick" over the attacks on Goldstone.

"I could not believe that political anger against him – which people had every right to express – had evolved into an uncontrolled and unconscionable rage that sought to violate the spirit of one of the most sacred aspects of formal Jewish tradition," he wrote. "What saddens me today is that any Jew who speaks out with an independent voice especially with the conduct of the State of Israel, is regarded as a self-hating Jew … Why should someone be made to choose between being a Jew and having a conscience?"

Goldstein has denied having a hand in the protests. In a column in Johannesburg's Business Day newspaper he said that after discussions within the Jewish community the synagogue will be open to Goldstone, but went on to attack his UN report as legally, factually and morally flawed and to accuse him of endangering Israel's security. Goldstone responded by condemning the chief rabbi's "questionable and unfortunate approach".

"I was dismayed that the chief rabbi would so brazenly politicise the occasion of my 13-year-old grandson's bar mitzvah to engage in further personal attacks," he wrote. "His rhetoric about 'open synagogues' simply does not coincide with how my family and I have been treated."