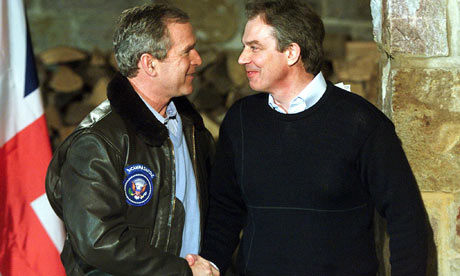 The invasion of Iraq in 2003 was a violation of international law, an independent inquiry in the Netherlands has found.

In a damning series of findings on the decision of the Dutch government to support Tony Blair and George Bush in the strategy of regime change in Iraq, the inquiry found the action had "no basis in international law".

The 551-page report, published today and chaired by former Dutch supreme court judge Willibrord Davids, said UN resolutions in the 1990s prior to the outbreak of war gave no authority to the invasion. "The Dutch government lent its political support to a war whose purpose was not consistent with Dutch government policy. The military action had no sound mandate in international law," it said.

The report came as the Chilcot inquiry in the UK heard evidence from Tony Blair's former press secretary, Alastair Campbell, about Britain's decision to enter the war.

Comparisons between the Davids report, which looked at the decision-making process surrounding the Dutch decision to back the war, and Chilcot's have led to criticism that the UK was not conducting a similar analysis of the legal implications in the run-up to the war.

The findings of the Davids report has serious implications for the UK, experts say, as it raises questions about the use of intelligence about weapons of mass destruction (WMD), an issue addressed by Campbell in his evidence before the Chilcot panel this morning.

"In its depiction of Iraq's WMD programme, the [Dutch] government was to a considerable extent led by public and other information from the US and the UK," the Davids report says.

It found that when the Dutch government decided in August 2002 to support the attack on Iraq it treated intelligence about WMD and the legality of an invasion as "subservient". The Dutch cabinet's policy was laid out in a 45-minute meeting, and came at a time when the newly elected prime minister, Jan Peter Balkenende, was preoccupied with domestic concerns, it said.

The Dutch intelligence agencies were "more reserved" in their assessments than the government when discussing the initiative in parliament, the report found.

During the build-up to the war, in 2003, the US abandoned an attempt to get a UN security council resolution approving the invasion when it became apparent it would not be granted. In 2004, the UN secretary general at the time, Kofi Annan, said the invasion was illegal.